In 2004, Cornwell Internet's sponsorship of the Durham Literature Festival reached its fourth year; it was also the second year in which, as a major part of our sponsorship, we provided the Festival website. Once more, Sumo Design permitted us to use their graphic designs for the Festival's print publicity to create an attractive website and a coherent image for the Festival.

Our aim in running the website has been to make the site a lively and attractive part of the festival, and we were delighted to learn that we were to receive help in doing this in 2004. The organisation Arts & Business exists to help business people to support the arts, and the arts to inspire business people, in the belief that good business and great art together create a richer society. They informed Durham City Arts that they would recognise our contribution to the 2003 Festival with matching funding in the form of a New Partners investment; this was to be used to fund the commissioning of new art works, which could be used to promote both Cornwell Internet and the Festival.

We decided that we would like to commission literary work which could be published on the Festival website, thus publicising both the Festival itself and our contribution to it. Alison Lister, then of Durham City Arts, was generous with her time and guidance, and we greatly enjoyed working with her to commission artists whose work we like, and thought would fit the criteria of the funding. It has been a particular delight that some of the artists we approached responded so positively to the idea of creating something specifically for the internet; this has sometimes returned the challenge to us, to collaborate in the process by presenting the work as its author intended!

Throughout the autumn of 2004, we maintained a continuing programme of adding commissioned work to the LitFest website, using a dedicated page about the New Partners commissions to record the status of work in progress. The first to appear was Absent Friends, a brilliant piece of hyperfiction (fiction designed to be read on the web, by clicking a sequence of links) by master of the short story, Chaz Brenchley. 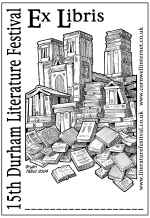 We returned from holiday in mid-September to find two treats in our inboxes. We had asked Bryan Talbot - whose graphic novels win international acclaim for both words and pictures - to design us a bookplate, which people could stick in the books they purchased at the Festival. He outdid our expectations with a vision of Durham Cathedral transformed into stacks of books - which you can see above right, as well as on its own page in our Commissioned Work portfolio, where you will also find a high-quality version in case you want to print out your own copy.

Also awaiting our return was a sample of Gail-Nina Anderson's inimitable verse: a set of three classic sonnets with a twist. The form has the twist that instead of the usual fourteen lines, each sonnet has an appropriate fifteen; and the content has just a touch of acidity, as it warns that looking back in order to celebrate anniversaries is not always enjoyable:


Memory's not confined by time or measure
Trawling the past's at best a risky pleasure
Remember, what you disclose may not be treasure

The final piece of work was a real challenge for Cornwell Internet: Valerie Laws supplied not only a poem, but also precise instructions for how it should be presented on the internet, with visual accompaniment. We were thrilled at the richness of the text, and rather unnerved at our own presumption in trying to give it the showcase it deserved; but eventually, and within a month of the close of the Festival, the piece was completed to our satisfaction.

Commissioning original art works has been a pleasure for us; we are thrilled to have had a hand in bringing into being something which would not otherwise have existed. We also felt it entirely right that the exercise has obliged us to extend our skills and attempt new ways of presenting material. Since this section has been removed from the redesigned website of the Literature Festival - now rebranded as Durham Book Festival - we have set up a showcase for it on our own web site: all the commissioned pieces can now be found via their own designated page on this web site.

And having developed a taste for patronage, we visited the Festival's Poet in Residence, Sheree Mack, and took up her offer to write "poems on demand". She was as good as her word, and wrote us a spontaneous poem on the word "web".