In 2003, Cornwell Internet's sponsorship of the Durham Literature Festival reached its fourth year, and switched from the sponsorship of a single event in 2001 to the provision of the Festival website. 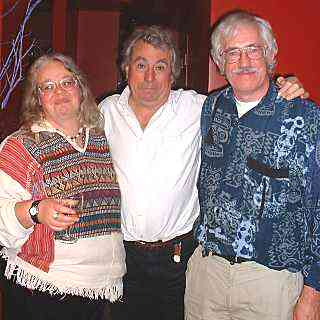 We also sponsored one specific event, this time indulging Jean's training as a medievalist by sponsoring the Festival's final gala event: former Python Terry Jones, talking about his latest book Who Murdered Chaucer?. His presentation was, (as we had anticipated) both thought-provoking and entertaining, and the evening delighted ourselves, our guests, and the rest of the audience in Durham's Gala Theatre.

But our main contribution to the Festival has been the maintenance of its website. In previous years, Sumo Design had generously set up a web version of the print publicity for the Festival, which they designed. This year, once again, the look of the website was taken from a graphic design prepared by Sumo for the Festival's printed publicity material, but we were able to adapt it so that it worked with the different medium that is the internet. In the period before the Festival and throughout its five-week run we worked closely with Festival organiser Alison Lister of Durham City Arts to provide timely information about last-minute programme changes, events selling out, and to give an extra boost to some events.

Our aim has been to bring to the site a greater degree of interaction between festival-goers, performers and festival organisers and we achieved this by running reports of almost all the events that took place. We were thrilled by the generosity of writers who allowed us to publish on the site some of the original writing presented at the Festival. This included poems by Valerie Laws and Gail-Nina Anderson, a winning entry in the short story competition (A Sense of Mischief) and Kevin Cadwallender's poem The Monster Mash, specially written for the Festival. Our report of Youth Showcase's A Durham Horror Story even included a link to a 14-minute video associated with the performance.

We then had the very pleasant surprise of learning that we would be able to take this partnership even further in 2004. The organisation Arts & Business (which exists to help business people to support the arts, and the arts to inspire business people), informed Durham City Arts that they would recognise our contribution to the Festival with matching funding in the form of a New Partners investment. This has funded the commissioning of new art works for 2004, which can be used to promote both Cornwell Internet and the Festival.